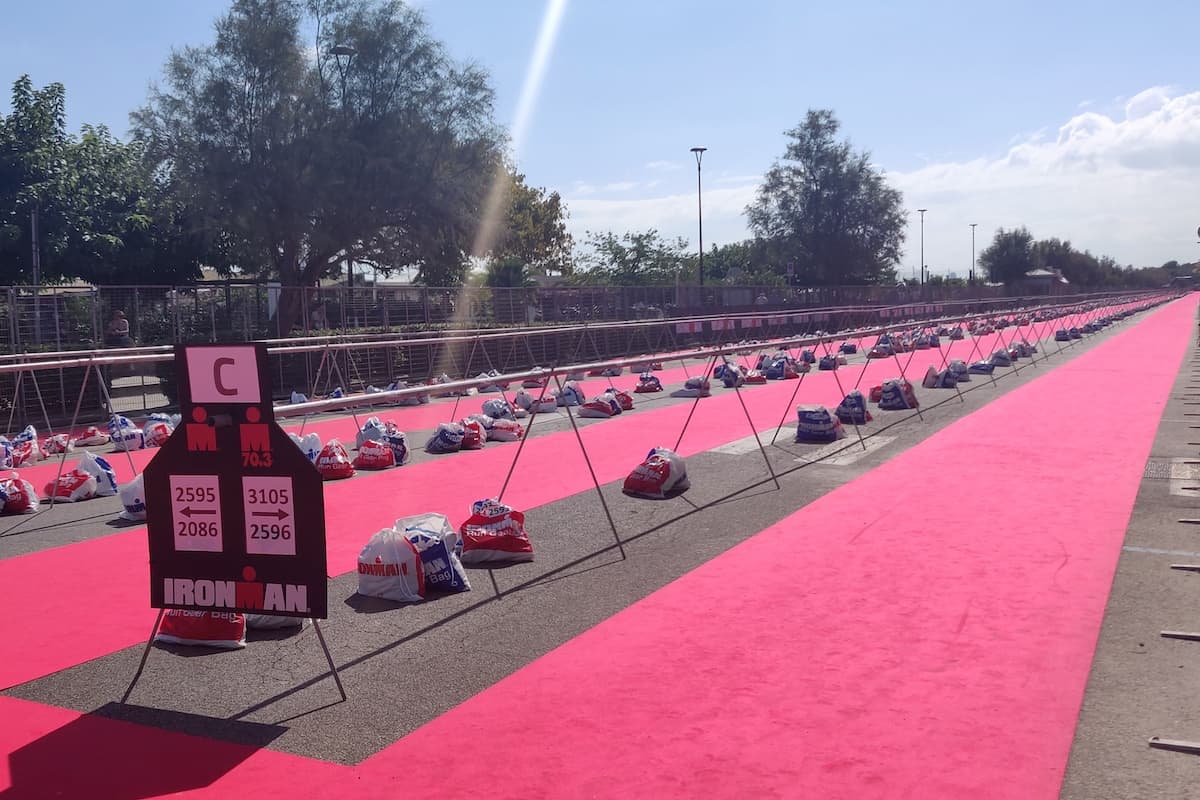 The 70.3 is my favorite distance in triathlon. It is long enough to be a real test of endurance and, at the same time, short enough that it doesn’t require too much training. In this article, I will cover each of the disciplines, the time triathletes need, and some tips to pick a race.

A Half Ironman triathlon is a middle distance triathlon from the brand Ironman. Dozens of other brands like Challenge also offer this distance.

Triathletes spend way more time on the bike than on the run or swim course. So let’s check that in more detail.

The swim distance of a Half Ironman is 1.2 mi or 1.9 km. It is the first of the three triathlon disciplines and the most feared.

On average, a triathlete needs 40min to complete the 1.2 mi swim. It varies a lot per age group and per swim location. I wrote a separate article that covers all of this if you are interested: Half Ironman Swim Time Per Age Group

For a Half Ironman, the swim generally takes place in a lake or ocean, less often in a river. I have never seen one in a pool, but I know it can exist for non-Ironman branded events.

The bike distance of a Half Ironman is 56 mi or 90 km. It is the second of the triathlon disciplines and also the longest.

On average, a triathlete will spend 3h02min on the bike course to complete the 56 mi. As you can find in my specific article on the Half Ironman bike speed, it varies a lot per gender, age group, and course profile.

Even though all Half Ironman races have roughly the same distance, the course profile can be really different. As an example, 70.3 Andorra counts roughly 11,000 ft of climbing, while in the 70.3 Warsaw you would need to climb less than 800 ft. So if you are not used to climbing, choose your race carefully.

The run distance of a Half Ironman is 13.1 mi or 21.1 km. It is the last triathlon discipline and where athletes realize how much of an endurance sport triathlon is.

The average time to complete the 13.1 mi is 2h11min. It is pretty impressive when you consider that triathletes already spent almost four hours on the course before even starting the half marathon. As for the other two disciplines, I analyzed the average time per age group and gender. Check this article for more details: Half Ironman Run Pace Per Age Group

HALF IRONMAN TIME SPENT PER SPORT

Adding up the three sports and the two transitions, a triathlete will spend on average 6h05min on the course. As you can see on the graph below, the bike is the most significant portion of a Half Ironman (50%), followed by the run (36%) and the swim (11%).

HOW TO PICK A HALF IRONMAN RACE

If you are up to the challenge of racing a Half Ironman, your next step is to register for one 🙂

The easiest way to find races is on the Ironman website.

Make sure you pick one race that fits your abilities. As mentioned previously, Andorra and its 11,000 ft of climbing on the bike is not for everyone.

The Half Ironman World Championship is held annually in a different location and generally not twice in a row on the same continent. The entrance to this world championship event is done through qualification, which happens at other Half Ironman races during the year.

The next 70.3 World Championships are planned in: