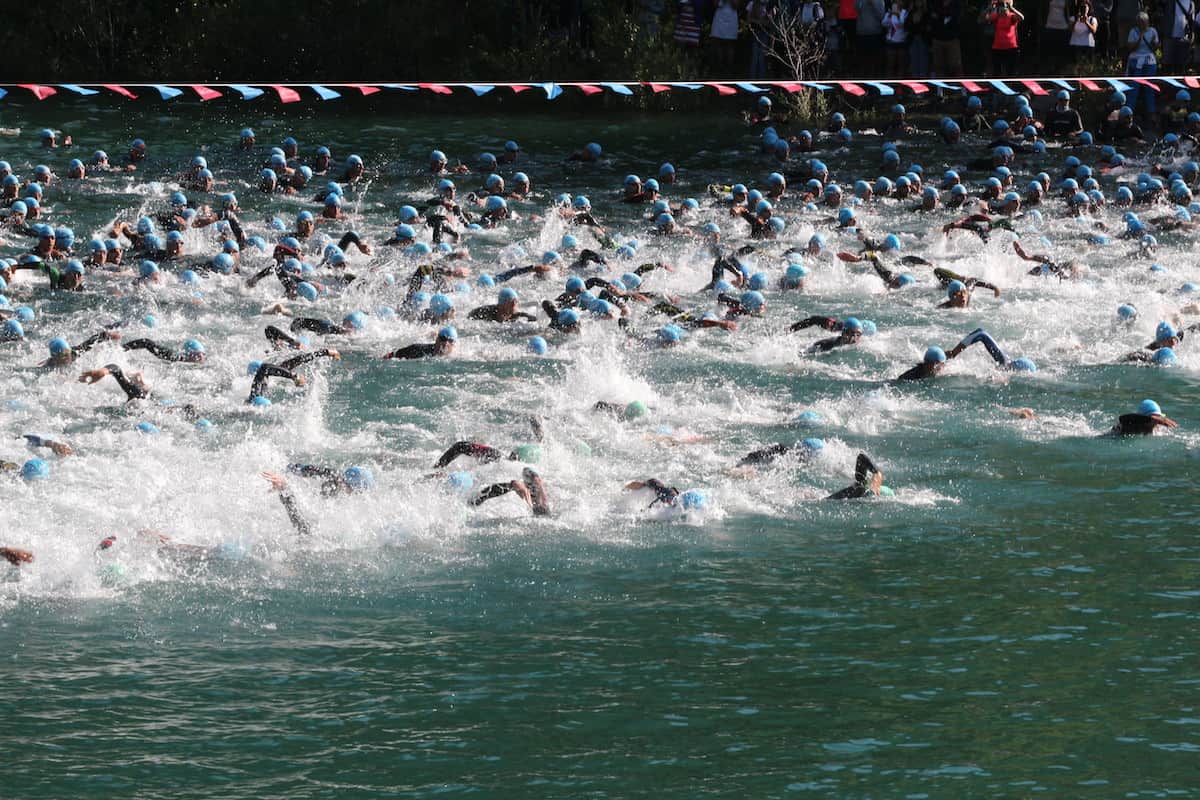 After doing a couple of Sprint triathlons, I moved to the Olympic distance triathlon. I think they are less of an all-out effort and more of an endurance event.

The distances of an Olympic Triathlon are 1.5 km swimming, 40 km biking, and 10 km running (or 0.93mi swim, 24.8mi bike, and 6.2mi run). Taking a beginner triathlete about 3 to 3h30 to complete, an Olympic distance is already a big test of endurance.

Good to know: The races you can watch on TV (Olympic Games, for example) allow drafting during the bike course. For this reason, you can’t really compare those times with the ones from amateurs where drafting is forbidden. If you want to learn more about the times that pro triathletes need, check this article instead: Triathlon At The Olympics

The swim distance of an Olympic Triathlon is 1.5 km or 0.93 mi. It is the first of the three triathlon disciplines and the most feared.

Based on my analysis of one representative race (Noosa Triathlon), on average, a triathlete needs 30min to complete the 1.5 km swim. It varies a lot per age group, as you can see in our detailed article: Average Olympic Triathlon Time Per Age Group

For an Olympic distance triathlon, the swim generally takes place in a lake or ocean and less often in a pool.

The bike distance of an Olympic Triathlon is 40 km or 24.8 mi. It is the second of the triathlon disciplines and also the longest.

On average, a triathlete will spend 1h17min on the bike course to complete the 40 km. If you want to see the breakdown per age group and gender, see my specific article on the topic.

Whereas the distance will be precisely 40km for the elite, it is common for amateurs to have a distance of 40 km +/- 5 km.

The elevation can also play a significant role in the difficulty of a race. For example, I consider the triathlon of Alpe D’Huez an Olympic distance triathlon even though the distance on the bike is “only” 28 km. The catch is that you have to climb the Alpe D’Huez with roughly 1,200 m (or 3,900 ft) of elevation gain.

My wife raced over this distance in 2021 (I did the long-distance one). She says this climb is a huge mental game. Each turn is numbered, so you know exactly how many you still have left until the end of the climb. If you are interested in this event, here are some highlights:

The run distance of an Olympic Triathlon is 10 km or 6.2 mi. It is the last triathlon discipline and where athletes realize how much of an endurance sport triathlon is.

The average time to complete the 10 km is 57min. As for the other sports, it can vary a lot per gender. Check out my specific article on times for more details.

Adding up the three sports and the two transitions, a triathlete will spend on average 2h53min on the course. As you can see on the graph below, the bike is the most significant portion of an Olympic Triathlon (44%), followed by the run (33%) and the swim (18%).

HOW TO PICK AN OLYMPIC TRIATHLON RACE