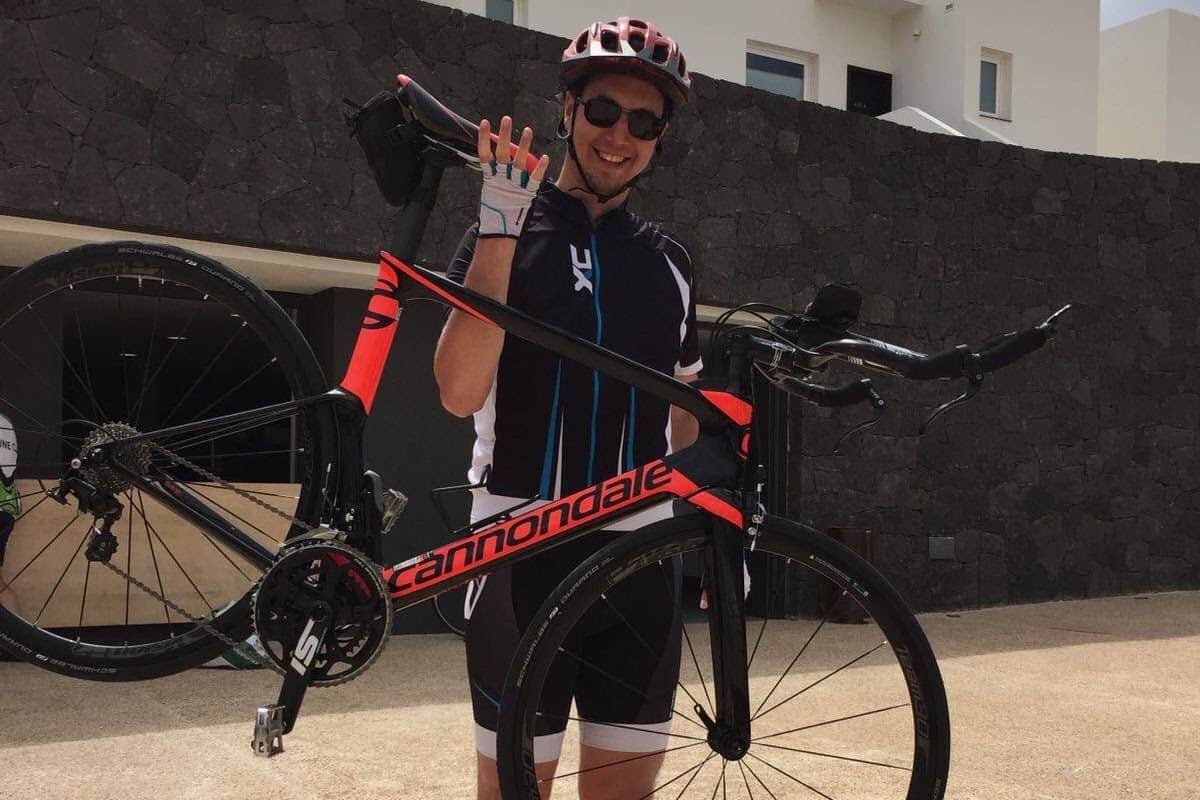 I’m now planning longer triathlon events for the next years, so I decided to research what makes triathlon bikes so special and see if it makes sense to invest in one.

The triathlon bike’s main advantage is its geometry: it is lowering your upper body and moving it forward to a so-called aero position. It won’t give you a significant time benefit vs. an optimized road bike with aero bars on the bike portion, but it will definitely keep your legs fresher for the run portion.

Let’s check in detail how much time a triathlon bike will save you on both the biking and the running courses.

HOW MUCH FASTER IS A TRIATHLON BIKE

This is by far the first question on the mind of triathletes when thinking about triathlon bikes.

I remember looking for it a couple of years ago and saw websites and forums stating that tri bikes will make you 5-10 min faster on an Olympic distance bike course. Most websites fail to mention (they want you to buy a tri bike!) that it really depends on which bikes you compare. The difference is, in fact, not so spectacular, at least during the bike course.

ON THE BIKE COURSE:

The best study I found is the one from Cycling Weekly and Boardman. They concluded that most of the gain in aerodynamics comes from having an optimized aero position. They didn’t see a significant difference between an optimized road bike with clip-on bars and a time trial bike.
Here is an extract of their results:

You can surely be 5-10 min faster on an Olympic race if you compare the time trial bike and someone on the hoods, but against an optimized position on clip-on bars, the difference is much smaller.

Here is the full video:

ON THE RUN COURSE:

In my research about tri bikes, this is what surprised me the most!

Howard Hurst and Catherine Jones studied the effects of bicycle geometry on Sprint triathlon running performance. They concluded that the running time improved significantly following cycling with an 81° seat tube angle (representing aggressive triathlon bikes like the Canyon Speedmax with 80,5°, most other triathlon brands are around 77°) vs following cycling with a 73° seat tube angle (representing most road bikes).

Of course, the time difference would be less for faster triathletes, but it can still be the difference between 1st and 2nd place.

Some other key highlights I noted from their study:

IS A TRIATHLON BIKE MORE COMFORTABLE

When properly fitted, both a road bike and a triathlon bike should feel equally comfortable. You might need some time to adapt to the new position, but you should definitely not feel any pain. Personally, I have done a bike fit where some adjustments were made (speaking about some mm). It literally removed the pain in my knees.

Depending on the distance and the course you are riding, some features of a triathlon bike can be advantageous over a road bike:

and some can be less favorable

HOW TO MAKE YOUR ROAD BIKE MORE AERO

As mentioned previously, most of the gain on the bike course is made by having a more aero position.

The two easiest steps you can take are:

For more details about gains with your helmet, skinsuit, and more, check our article: “How to improve your triathlon time.“

FROM WHICH POINT ON SHOULD YOU CONSIDER BUYING A TRIATHLON BIKE

If you are fighting for podium places and have the budget, investing in a triathlon bike can be really beneficial. I personally really like the feeling of overtaking someone riding a fancy triathlon bike 😀

As I am going for longer distances and want to have the comfort of a triathlon bike, I fixed myself two goals I want to achieve before pulling the trigger:

Those are ambitious enough for me that I will have some time to save money, and once I reach them, the risk of having someone overtaking me with a road bike will be lower 🙂

If you expected a justification for you to buy a triathlon bike, I’m sorry that I disappointed you 🙂 You now know what you can achieve with an optimized road bike set up and see if investing in a triathlon bike would make sense for you.