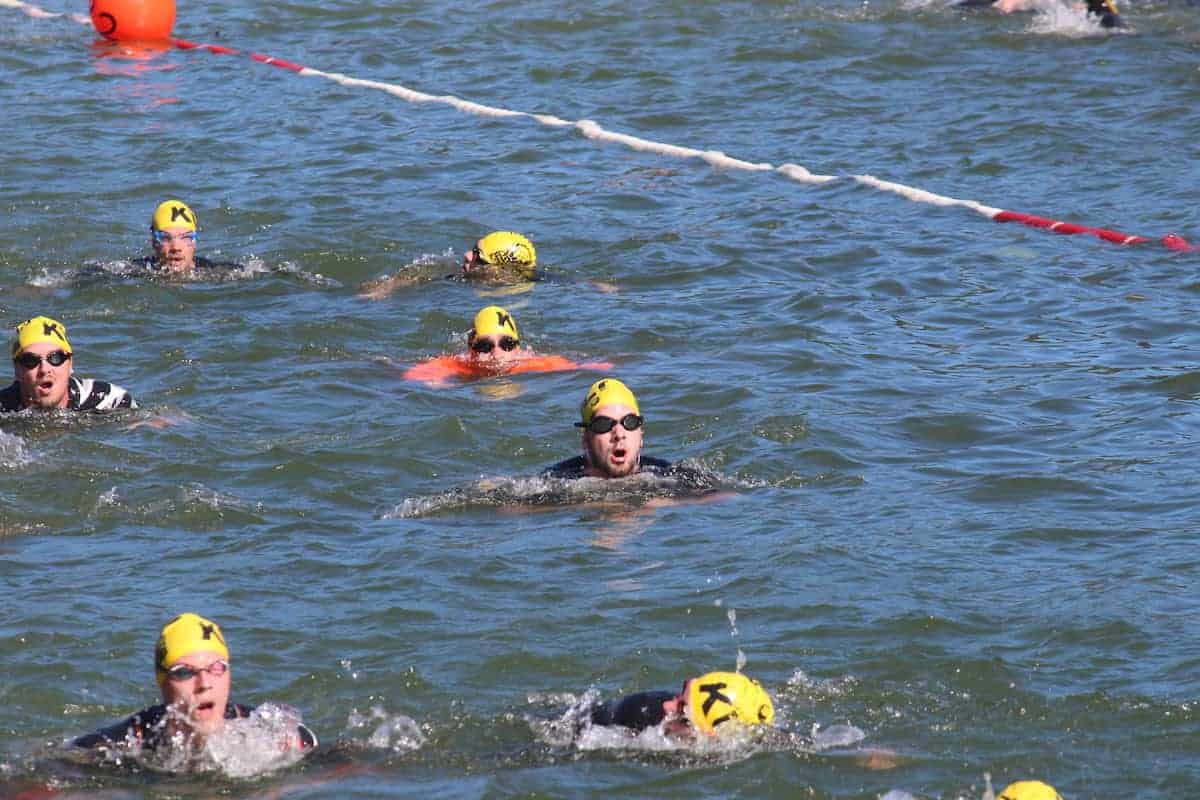 I couldn’t swim more than 10m freestyle when I started triathlon. So, learning that I could swim breaststroke during races was a big relief. Even if you are an experienced triathlete, I bet you don’t know some of the following rules, or you didn’t know that they can vary by country.

WHAT ARE THE WETSUIT RULES IN TRIATHLON?

A triathlon wetsuit must not be thicker than 5mm. Depending on the temperature of the water and on the country where you will race, a wetsuit might be mandatory, permitted, or forbidden.

In the Ironman races, the wetsuit rules are purely based on the water temperature, as illustrated in the table below (for age group triathletes):

Please note that in some instances, the race organizers might amend those to reflect the country’s rules instead. Have a look at the specific athlete’s guide to ensure that you would still be eligible for awards.

The table below shows the wetsuit rules for races sanctioned by USA Triathlon. They are purely based on the water temperature (for age group triathletes):

Please note that for temperatures between 78.1°F and 83.9°F, the wetsuit is also permitted, but you would not be eligible for awards/rankings.

For races falling under the British federation, the wetsuit rules are based on distances and water temperatures. See below table applicable for age groups triathletes until age 59:

For races falling under the French federation, the wetsuit rules are purely based on water temperatures for adult age group triathletes:

For races falling under the German federation, the wetsuit rules are based on distances and water temperatures. See below table applicable for age groups triathletes until age 59:

For triathletes who are 60 and above, wetsuits are mandatory below 16°C, permitted between 16°C and 24.5°C and forbidden above 24.5°C for all distances.

Do I really need a wetsuit?

When wetsuits are permitted, it is really up to your personal preferences and your swim abilities. I find wetsuits incredible when swimming freestyle, but when I started triathlon and could only do breaststroke, I tried to avoid wearing one. My legs were often too high in the water or even outside the water. I somehow compensated for it with my back which gave me back pains. Make sure you try it before your race.

Also, consider the time it might take you to remove it during the transition. Beginners might be better off swimming without one for really short distances (Super Sprint or Sprint).

DO YOU WEAR UNDERWEAR IN A TRIATHLON?

Triathletes are not wearing underwear in a triathlon. Instead, they are wearing a triathlon suit, commonly called a tri suit. It comes in one or two pieces, is slightly padded, and is the only clothe triathletes wear from the start to the finish line. If wetsuits are allowed during the swim portion, the tri suit is worn under it.

If you want to learn more about tri suits, have a look at my article: Advantages Of Triathlon Suits And What You Should Look For

Please note that even though it is not common, some triathletes choose to wear different outfits for each discipline. It can be for comfort over longer distances or simply because they don’t have a tri suit yet. In this case, they will wear underwear at some point during the race.

CAN I SWIM BREASTSTROKE IN A TRIATHLON?

Swimming breaststroke is allowed in all triathlon races. Many beginner triathletes are using this stroke for the entire swim portion of a race or are switching between freestyle and breaststroke.

During my first triathlons, I tried to swim freestyle and switched several times to breaststroke when I was getting tired and also to bring me back in the right direction. It is way more common than beginner triathletes might think.

If you are swimming breaststroke, keep in mind that you will need a bit more space around you. From experience, receiving a kick from someone doing breaststroke can be really painful. However, as long as you do not voluntarily or repeatedly touch other triathletes, you should not worry too much about it. Otherwise, it may lead to disqualification.

CAN I SWIM BACKSTROKE IN A TRIATHLON?

Even though it is rare to see someone doing the backstroke in a triathlon, it is allowed by most triathlon federations. Looking at the biggest triathlon federations, only Great Britain has a specific rule about this stroke. They are forbidding it for any pool swim, and for open water triathlons, athletes must inform the race organizers before the race.

CAN I REST DURING A TRIATHLON SWIM?

Resting in a triathlon swim is allowed as long as triathletes don’t make forward progress. Athletes can rest by standing on the bottom or holding to an inanimate object (ex: buoys, stationary boats, floating objects). If a triathlete is requesting assistance, he will need to retire from the race.

I was surprised by this rule. I always thought that resting would automatically lead to disqualification. If you have friends who are afraid to participate in triathlon because of the swim portion, make sure to mention it!

CAN I WEAR MY OWN SWIM CAP IN A TRIATHLON?

The race organizers provided the swim caps in all triathlons I have been part of. You might see different colors depending on the swim waves (female/male, distances).

WHAT IS A SWIM CUT-OFF TIME?

In all triathlon races, the race organizers will define some cut-off times. If you exceed them, you will be disqualified. Those times can be explicitly set per sport and/or cumulative, for example, swim + transition 1 + bike. There is no standard time per distance. Check the athlete’s guide of the race you want to register.

For really competitive events, those times can be challenging to reach for beginner triathletes. However, in most cases, they are manageable.

For example, the Ironman races often set a 2h20min cut-off time for their swim portion (2.4 mi or 3,8km). Therefore, you would need to swim slower than 3:41 min/100m to exceed this time. If that seems doable for you, you might be interested in this article: “Average Swim Times For An Ironman” so you know where you could potentially be in a race.