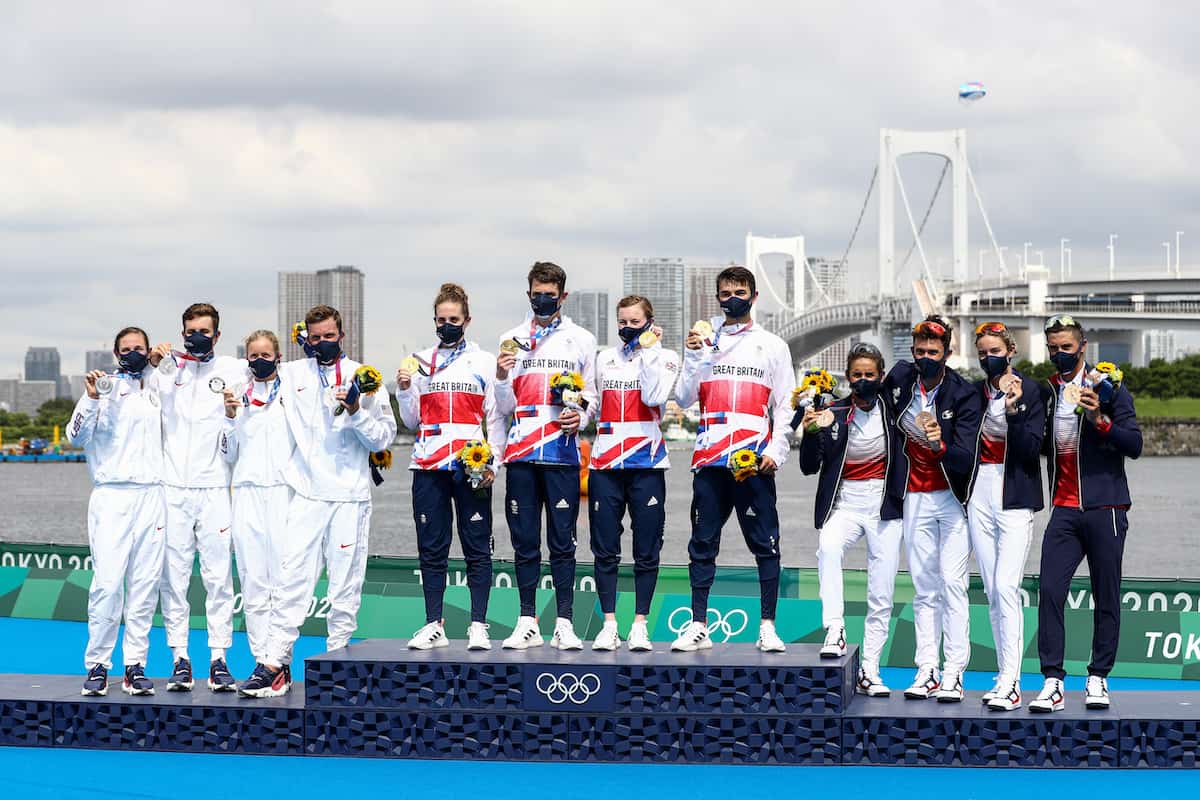 I really enjoyed participating in a triathlon relay. As you have a team dynamic, it is truly a different experience. It also allows athletes to take part in a triathlon who might have never participated in one alone.

There are two types of triathlon relays:

Those are two very different types of triathlon relay. Let’s check that in more detail.

WHAT IS A MIXED RELAY TRIATHLON?

A mixed relay triathlon is a team event where four triathletes are each doing a Super Sprint triathlon. It is mainly a pro race, and the order is always female-male-female-male.

Unlike at the athletics 4x100m, triathletes have no baton to transfer to their teammate. Instead, they simply tap the hand of their teammate once they complete their race.

As all the first females of each team start simultaneously (no rolling start in a mixed relay triathlon), the first team to cross the finish line wins. The total time is computed by adding each athlete’s time.

A mixed relay consists of four Super Sprint triathlons. Even though the exact distance varies slightly per event, the best triathletes generally need around 20 to 22 min to complete one leg.

By the way, if you missed this race, here is a full replay:

I have also written a separate article on the triathlon at the Olympics. You will learn which country is leading in total medals and find useful information about each Olympic game.

WHAT IS A TEAM RELAY TRIATHLON?

A team relay is a triathlon race split between two or three triathletes. For example, one athlete can do the swim, one the bike, and a third one the run portion.

This type of relay is widespread amongst amateur races. It is a great way to try a triathlon race without doing the three disciplines.

Depending on the race, the relay teams might start at the same time as the individual triathletes or have their own separate start. Hence, it is not always straightforward to know who is leading here. To be honest, it never bothered me as I was never competing for podium anyway 🙂

In most races, the swimmer will receive the timing chip during the registration process. Once he completes the swim portion, he will need to pass the chip to his next teammate. This is happening at a specific location in the transition area. The same will happen in T2, where the cyclist will transfer the chip to the runner.

I have seen team relays of pretty much every distance. For Ironman events, it is possible to do a 70.3 race as a team, but unfortunately, I have not yet seen this format for a full Ironman.

I know that Challenge Roth (full distance triathlon) offers this format. According to their website, around 3,400 individual participants and 650 relay teams participate in this race.

If you want to learn more about the other triathlon distances available, have a look at my article, which summarizes the most common ones: A Quick Overview Of All Triathlon Distances