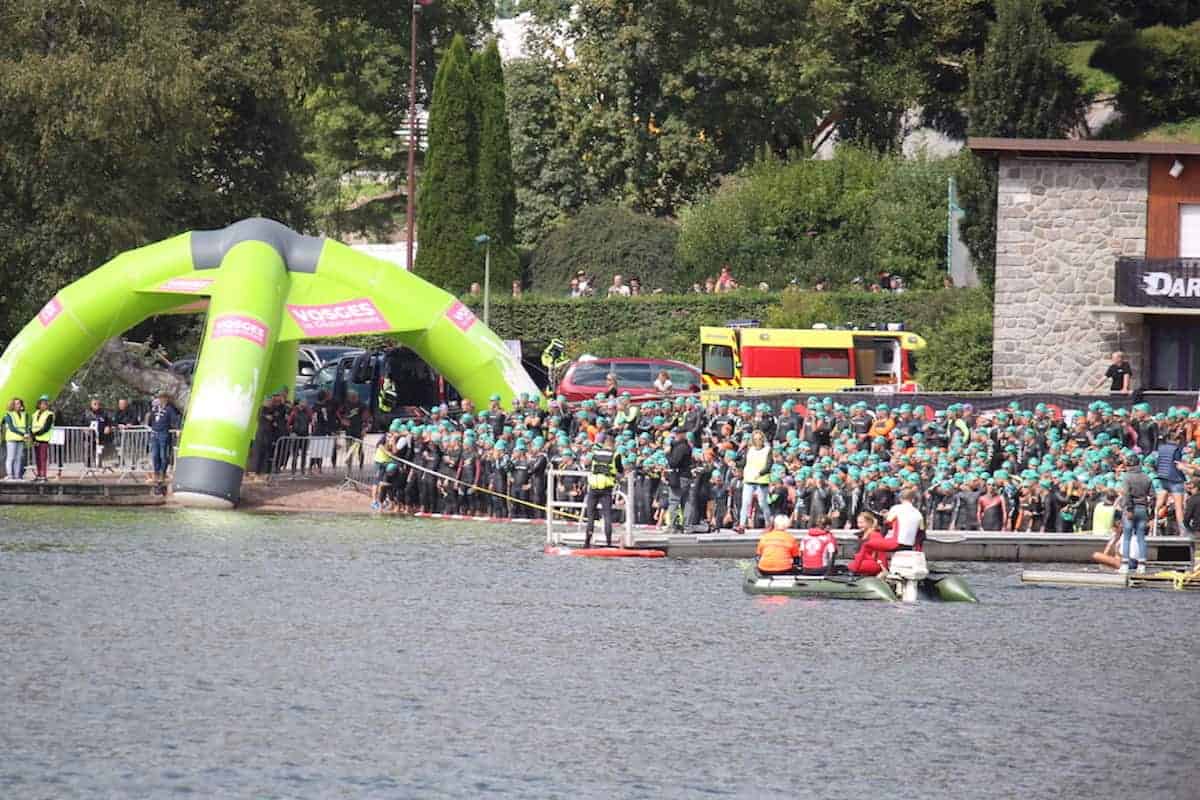 When talking to non-triathlete friends (yes, I have some! 🙂 ), they often ask me what is the order of a triathlon and why.

A triathlon always follows the same order: swim, bike, and run, no matter the distance. Only the length of each sport will change depending on the race distance.

Having this order is mainly for the safety of the triathletes, but not only. So let’s check that in more detail.

1. SAFETY OF THE TRIATHLETES

Even though it is pretty rare to have bad accidents in triathlon, it can happen. I definitely don’t want to scare you to not start a triathlon. I just think it is important to be aware of it.

In studying 32 years of data, Kevin Harris concluded that 67% of the fatalities in triathlon races happen during the swim portion (16% on the bike, 11% on the run, and 6% during post-race recovery, link to his research).

I can easily imagine that having the swim portion after another sport where athletes are already tired would only increase this risk. Therefore, to guarantee the highest swim safety possible, swimming is at the beginning.

If you are worried about the swim, look at my article: 15 Easy Steps To Survive A Triathlon Swim. It will take some pressure off your shoulders, and who knows – you might even enjoy it 😉

Imagine for a second if all non-drafting triathlons would start with the bike portion: first, the start would take forever, and then it would be an absolute nightmare for any race official to control drafting. By putting biking after swimming, the triathletes are already spread out at the beginning of the bike portion.

Making the event draft legal would significantly reduce the importance of the biking portion in a triathlon. I don’t know many people who would spend all of their energy on an attack during the bike, knowing that an entire peloton is chasing them, and on top of that, you still need to swim and run afterward.

By putting the bike in the end, the chances to get regroupings and a sprint finish are relatively high. It can be really dangerous for the athletes and the spectators, but it is also tricky for race organizers to attribute good rankings when tight.

Having a run finish instead is a safer option, and at the same time, it gives the spectators a breathtaking experience of several minutes. Don’t you agree? Below is a tight race finish video from World Triathlon:

Having the swim portion last would make it extremely complicated for spectators to know who is leading. While you might recognize a triathlete based on their swim style on TV, you have no chance to see that when you are 700m away.

My husband’s dad took a picture when Clément did a triathlon in Allgäu. Halfway through the swim, triathletes are coming close to the spectators. But even being that close, it is not easy to know who is who (Clément still didn’t find himself in this picture 🙂 )

Sure, triathlon consists of three different sports, but you also need to consider the transitions between them. For example, in T1 (between swim and bike), you need time to remove your wetsuit and other swimming equipment, put your helmet on and take your bike. In T2 (between bike and run), you need time to rack your bike, remove your helmet and cycling shoes, and put on running shoes.

Running and then biking instead of the traditional bike-run would not be an issue during the transition. However, not having swimming as a starting discipline would bring the difficulty of the transitions to another level. Taking off a wetsuit is relatively easy; putting it on is a complete mastery, especially if you are sweating and under stress.

This would be a competition on its own. It could be fun to watch but definitely not to do 🙂

Having the swim portion in a warm lake or swimming pool would eliminate the need for a wetsuit, but do we really want that as triathletes?

Biking is often the sport that necessitates most work from volunteers, police officers, and local firefighters due to its larger distances. Having the bike last would mean that volunteers need to stay longer to help, and locals will experience more prolonged road closure.

You could fix this by doing short biking laps, but I think it would also make triathlon less attractive.

7. EASIER CONTROL IN THE WATER

Having everyone in the water simultaneously (or almost at the same time for wave starts) is extremely helpful for controlling the swim portion. It makes the life of the lifeguards, the kayakers, and scuba divers way easier. They know at all times where are the first and last swimmers. Imagine if swimming was the second sport…

If it makes their job easier, it also means it will make the life of triathletes safer.

The triathlon order is not a rule per se. Some event organizers decided to do it differently. Here are two examples that I know:

When you think about those seven reasons, I am actually quite happy that triathlons are ordered the way they are currently: swim, bike, and run. I don’t think I would prefer it any other way.

If you want to start triathlon, look at this article which covers the main triathlon distances, it will help you choose the perfect one for you.