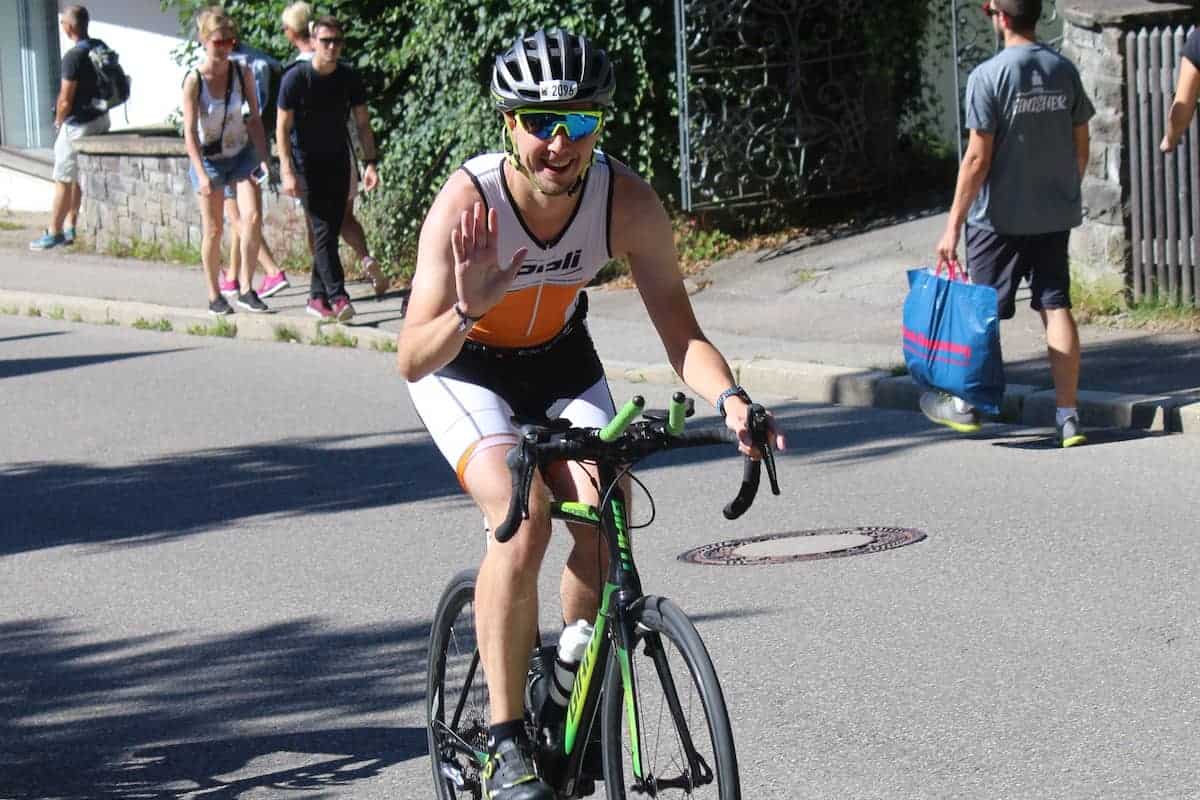 Even though I have already done plenty of triathlons, there were still some bike rules I didn’t know, especially the one about external help.

WHAT ARE THE DRAFTING RULES IN A TRIATHLON?

If we look at the non-draft races, which are the vast majority of triathlons for amateurs, triathletes must stay at all times outside a draft zone to avoid receiving a time penalty. The only exception is when overtaking. In this case, they can enter this zone but have a certain amount of time to overtake the triathletes in front of them. If they exceed this time, they will receive a time penalty.

The length of the zone and the time a triathlete has to overtake varies per organizer and per federation. I wrote an entire article that goes more in-depth about it. Check it here: Drafting In Triathlon: What Is Legal And What Is Forbidden

WHICH BIKE CAN I USE IN A TRIATHLON?

The vast majority of triathletes will race on either a triathlon bike or a road bike. For short-distance events, it is, however, pretty common to see amateurs training and racing on a mountain bike. I trained and raced on my mountain bike for a year. I described how I trained, raced and what I would improve on my setup in this article.

It is important to know that your bike will be checked before entering the transition area. So ensure that your end plugs are present and that your wheels and brakes are running smoothly.

It is worth mentioning that specific mountain bike triathlon races exist. They are called cross triathlon or offroad triathlon. Depending on where you are in the world, they might be pretty common. I wish someone would have told me sooner that this type of triathlon existed!

For more details on cross triathlon, check out my article: The Basics Of Cross Triathlon: Distances, Gears And Races

You can’t use headphones in a triathlon in all three disciplines. You will receive a time penalty which can even lead to disqualification if you don’t remove them promptly.

CAN I RECEIVE HELP WITHOUT BEING DISQUALIFIED?

I was surprised by this rule as I thought I would automatically be disqualified if I received some help.

On the bike course, triathletes can receive help from race officials or other triathletes, but not from external persons. Ironman, for example, states that “Athletes competing in the same race may assist each other with incidental items such as, but not restricted to: nutrition and drinks after an aid station, pumps, tires, inner tubes, and puncture repair kits.”

You can’t give an item to another triathlete if it would end your race, like a wheel or a bike. In this case, you and the other athlete will be disqualified.

CAN I RIDE WHEREVER I WANT ON THE STREET?

Depending on the race, the organizers might manage to close the entire street so that no cars are allowed to drive in the biking course. This information will be communicated at the latest during the race briefing.

Even if the street is closed for external traffic, you still cannot use the entire portion of the road. Depending on your race location, you should either stay on the right or left side of the street. You always need to let space for the motorbikes of the race officials and also for the other competitors who want to overtake you.