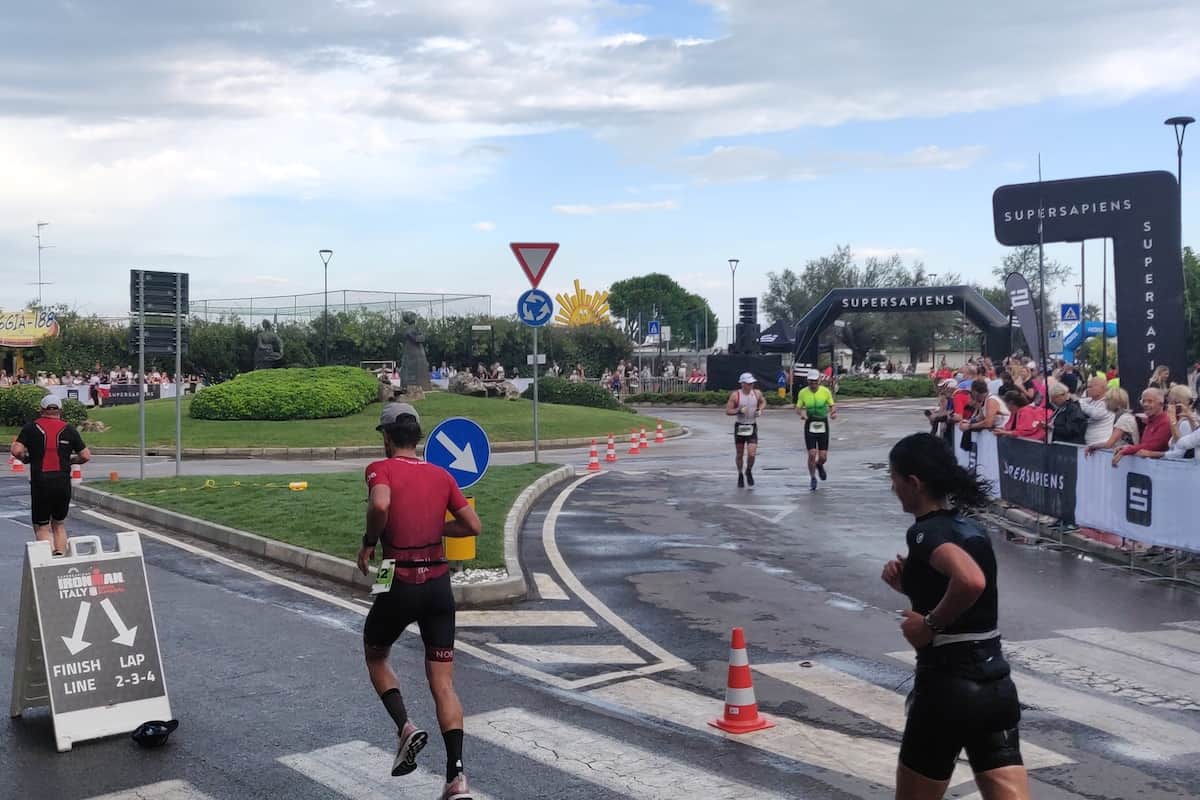 When speaking with non-triathlete friends, they are often familiar with the name Ironman but don’t know the specifics. In this article, I will cover each of the disciplines, the time triathletes need, and some tips to pick a race.

An Ironman triathlon is a full-distance triathlon from the brand Ironman. Dozens of other brands like Challenge also offer this distance.

Triathletes spend way more time on the bike than on the run or swim course. So let’s check that in more detail.

The swim distance of an Ironman is 2.4 mi or 3.8 km. It is the first of the three triathlon disciplines and the most feared.

On average, a triathlete needs 1h19min to complete the 2.4 mi swim. It varies a lot per age group, per swim location, and on the authorization of wetsuits. I wrote a separate article that covers all of this if you are interested: Average Swim Times For An Ironman

For an Ironman, the swim generally takes place in a lake or ocean, less often in a river. I have never seen one in a pool, but I know it can exist for non-Ironman branded events.

The bike distance of an Ironman is 112 mi or 180 km. It is the second of the triathlon disciplines and also the longest.

On average, a triathlete will spend 6h18min on the bike course to complete the 112 mi. As you can find in my specific article on the Ironman bike speed, it varies a lot per gender, age group, and course profile.

There is a wide variety of bike courses on the Ironman circuit. It goes from entirely flat courses like IM Maryland to IM France with more than 9,000 ft of climbing. I wrote a separate article that covers the Ironman Elevation Gain.

The run distance of an Ironman is 26.2 mi or 42.2 km. It is the last triathlon discipline and where athletes realize how much of an endurance sport triathlon is.

The average time to complete the 26.2 mi is 4h52min. You might not be that impressed if you are familiar with stand-alone marathon times. Remember that triathletes are already racing for more than 7 hours on average before even starting the marathon. As for the other two disciplines, I analyzed the average time per age group and gender. Check this article for more details: Ironman Run Pace Per Age Group

Adding up the three sports and the two transitions, a triathlete will spend on average 12h49min on the course. As you can see on the graph below, the bike is the most significant portion of an Ironman (50%), followed by the run (38%) and the swim (10%).

HOW TO PICK AN IRONMAN RACE

If you feel confident enough to finish an Ironman within the cut off time (15 or 17 hours depending on the race), your next step is to register for one 🙂

The easiest way to find races is on the Ironman website.

The Ironman World Championship is held annually in Kona, Hawaii. It is considered the holy grail for some triathletes. The entrance to this world championship event is done through qualification, which primarily happens at other Ironman races during the year.

If you want to learn more about this race, here is a quick overview of the 2019 race on Youtube:

Fortunately for us triathletes, the Ironman distance is not the only one. There are plenty of other options available. Have a look at my article, which summarizes the most common ones: A Quick Overview Of All Triathlon Distances