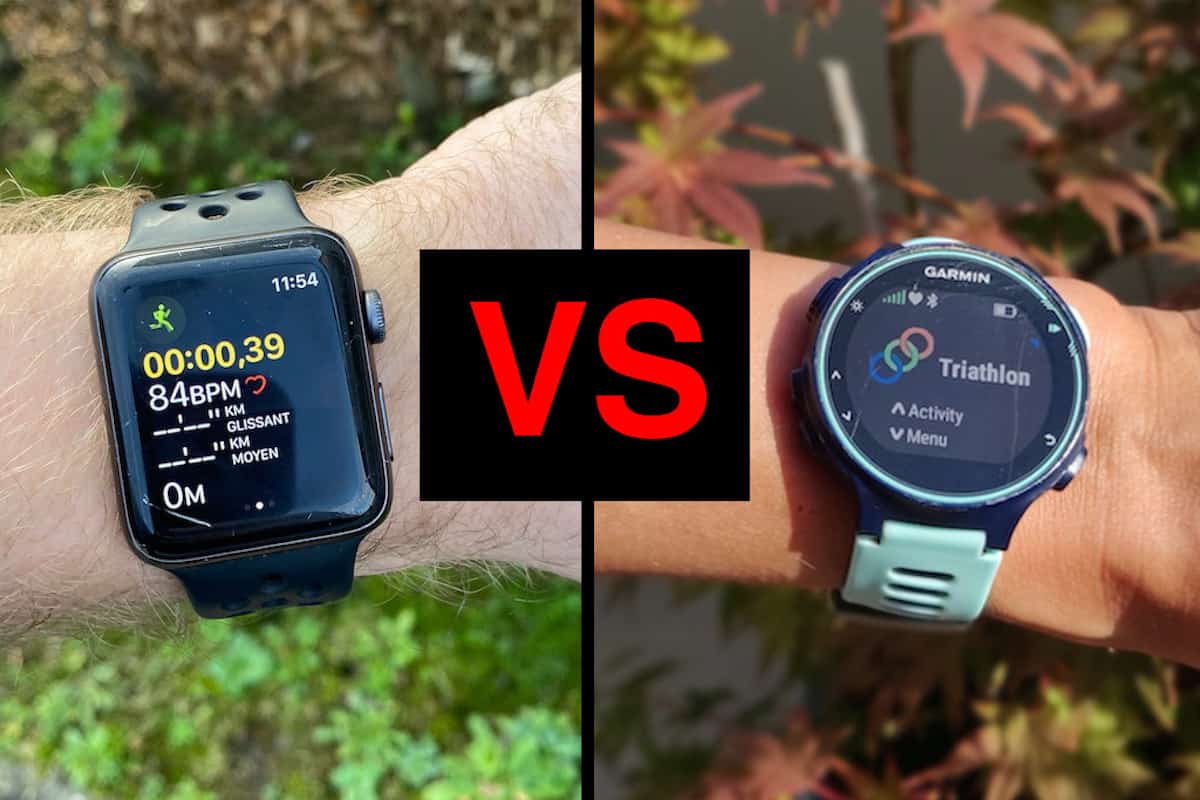 The choice between buying an Apple Watch or a Garmin watch is much easier than triathletes first imagine. I have experience with both brands for triathlon training, and here are my thoughts about them.

The Apple Watches are perfect for triathletes who want an everyday fitness watch, race short-distance triathlons, and only need basic metrics.

On the other hand, the Garmin watches (especially the Forerunner and Fenix series) are made for multisport. They last days or even weeks on a single charge and can be paired with pretty much all external sensors and software for accessing more advanced metrics.

Let’s check in more detail which brand and which specific models would best fit you.

Below is a quick test I have created to help you decide between the two brands. Of course, I am only considering the triathlon watches from Garmin (see the full list in this article).

Apart from the obvious fact that you need an iPhone to use the Apple Watch, there are a couple of critical differences between the two brands:

You can expect to charge your Apple Watch pretty much every single day, whereas Garmin watches will last several days (or even weeks) on a single charge. Regarding race day, both watches are fine for short-distance triathlons, but I would definitely opt for a Garmin for anything longer than an Olympic distance race. I have heard too many stories of triathletes having their Apple Watches die during those. I really hope Apple can improve on that aspect!

MULTIPLE APPS VS ALL IN ONE

When buying a Garmin, you can expect to have all metrics you need by default on your watch. It will also connect with pretty much all external sensors and third-party software. In five years, I have not had a single issue regarding connectivity.

When buying an Apple Watch, you will only get the basic metrics out of the box and the possibility to connect the watch to the most popular platforms (like TrainingPeaks and Strava). That’s pretty much it.

For everything else, you will need to download an app. It can be seen as a big advantage or as a big disadvantage. I personally find it annoying, but I am also a bit of a data geek 🙂 I wrote another article on my 5 favorite Apple Watch apps, have a look here.

The Apple watch used to be the only one with Cellular function. However, Garmin released the Forerunner 945 LTE (Amazon affiliate link) and I expect them to expand this as well to their new models.

Where you can call or send texts with your Apple Watch, the Garmin watch is purely using the LTE for tracking and safety.

If you want a watch primarily for everyday fitness, I would definitely pick the Apple Watch. The watch and its ecosystem (Apple Fitness+) are really designed for that.

Now that you probably know which of the two brands is fulfilling your needs, it is time to speak about the specific models!

WHICH APPLE WATCH FOR TRIATHLON

Currently, Apple sells three models of their watch. They are all perfectly fine for triathlon, and your choice between them will be for functionalities not directly related to triathlon.

The Apple Watch 3 is the cheapest option available. There is no cellular function available, and I would personally think twice before buying a watch that was originally released in 2017. It will not be long before some apps stop working with this version, and as you read above: a triathlete needs quite a few of them!

The Apple Watch SE (affiliate link to Amazon) would personally be my go-to watch from Apple. There is the cellular function as an option, and the risk to become obsolete in the next 1-2 years is quite low.

The Apple Watch 7 (affiliate link to Amazon) is interesting if you want to have the blood oxygen measurement and always-on display. Do you really need those?

WHICH GARMIN WATCH FOR TRIATHLON

When looking through the Garmin models, make sure to pick a watch having the triathlon mode. It records your swim, bike, run and transitions into a single activity so that you don’t need to save and start each of those activities manually during a race. Here is the full list.

You cannot go wrong with those two watches: